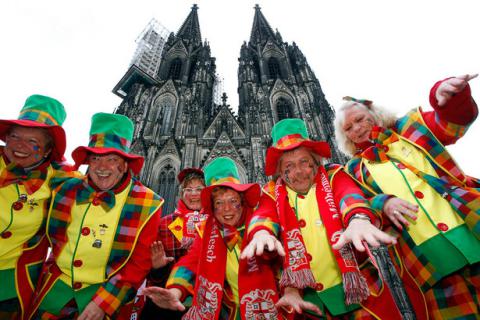 Fastelovend in KölnFor example the Carnival is called "Kölle Alaaf" in Cologne - the carnival stronghold in Germany. "Karneval" or "Fastelovend" starts traditionally on 11.11 at 11:11 o’clock on the Alter Markt with the presentation of the Cologne triumvirate: Prince, farmer and maiden. These are re-elected every year and are the rulers of thefool people (that's what the carnival people are called for fun). On Carnival Friday (Friday after "Wieverfastelovend", as it is called in Cologne), the Sternenmarsch takes place. From Heumarkt it goes through the city of Cologne to the Alter Markt, where the “Narren” are welcomed by the triumvirates. On Carnival Saturday, the scary Ghost Train follows and then on Sunday - the traditional “Schull- and Veedelzöch”, in which over 8000 carnivalists fight for the starting position in the Rosenmontagszug. It is the highlight of the carnival and starts every year at 10:11. 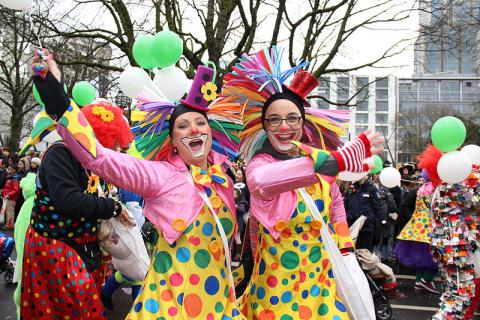 Karneval in DüsseldorfIn Dusseldorf, the Carnival begins on 11.11 at 11:11 o’clock with the awakening of Hoppeditz. By the way, he will be buried again on Aschermittwoch and will sleep peacefully until his renewed awakening (the following year). With his usual scathing humour, he gets out of his mustard pot and brings the Carnival to life. Düsseldorf’s highlights include the “Böse-Buben-Ball” (with over 3,000 visitors per year), the “Stunksitzung” or the barrel race. The final highlight of the street carnival is the Rosenmontag-parade, which starts at 12:30 and is accompanied by the strong "Helau" of the Jecken. 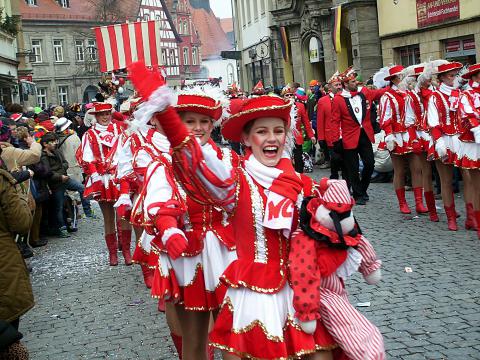 Fasching in FrankfurtHere, too, the carnival time begins on 11:11 at 11:11 o’clock, with the coronation of the royal couplein the Nordwestzentrum. Here, the "schmotzigerDonnerstag" heralds the beginning of the street carnival and extends over “Nelkensamstag”, “Tulpensonntag”, “Rosenmontag” through to “Faschingsdienstag”, where the royal couple is traditionally dethroned to usher the end of the carnival season.On Rosenmontag at 12:11 o'clock over 30 parade floats and 40 joke and committee floats with over 3000 participants from 97 associations and organisations are moving through the city center of Frankfurt, celebrating the culmination of the carnival season with more than 450,000 Jecken (visitors). 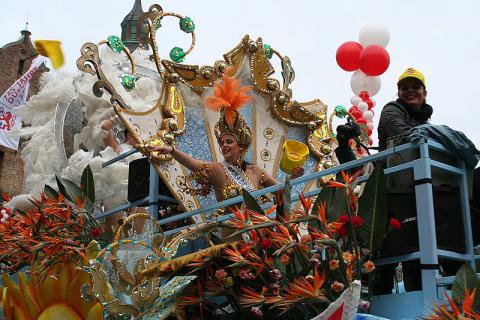 Fasching in MünchenIn Munich, the carnival time starts on 11.11 at 11:11 o’clock with festivities on the Viktualienmarkt. Countless events and balls of the carnival clubs sweeten the Jecken the time until the "unsinnigen Donnerstag", which heralds the street carnival with the traditional “dance of the market women”. Carnival can be celebrated everywhere in the city throughout the weekend until the Rosenmontag. The Rosenmontag-parade is the highlight of the carnival season. 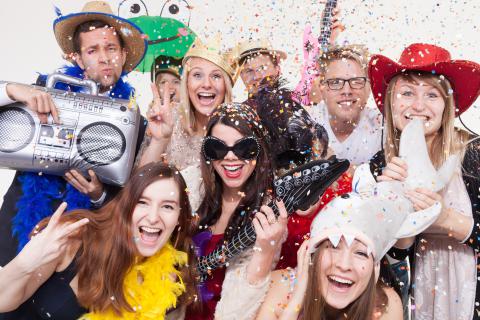 Germany has many traditions and customs, but none is as colourful and cheerful as the Carnival. However, Carnival is not celebrated in all regions and cities of Germany. It almost seems as if the hustle and bustle and the associated costumes split the nation into two camps. While some avoid everything and everyone around the topic, the others plan their costumes months in advance and prepare right down to the detail for the Carnival, and to become part of the greater whole and to celebrate.

The 5th season, as Carnival often called, starts traditionally on 11.11.  at 11:11 o’clock and ends with the beginning of Lent, which starts with the “Aschermittwoch”. The famous street carnival begins with the "Altweiberfastnacht", the "schmotzigen Donnerstag" or the "Wieverfastelovend", in which the women storm the town halls, cut the shoelaces or the neckties of the men. Various parades and parties in pubs and discotheques sweeten the weekend for the “Jecken” or “Narren” (a term for dressed people at the Carnival) and unite young and old. The “Rosenmontag” with its large parades, is the final highlight of the street carnival. When the lovingly designed carriages wander the streets, the “Gardetänzer” (dancers) perform their choreographies and the royal couple (“Prinzenpaar”) shows themselves to the “Jecken”, it is time to take a bag and go out on the streets to gather sweets and goodies. Probably the largest Rosenmontag parade can be seen in Cologne with over 100 cars and 10,000 participants, closely followed by Düsseldorf.

In the period between 11.11 and the Altweiberfastnacht, the carnivalists  are preparing for the great processions, the newly crowned royal couple attends various events and meetings, carnival clubs organize their own large meetings and honour important people with special carnival orders, dancers perform their rehearsed choreographies and bands and comedians, as well as the so-called “Büttenredner”, entertain the guests with all sorts of music and fun speeches. A look behind the scenes is worthwhile and brings a lot of fun for all carnival enthusiasts.

The costumes need creativity - the biggest carnival fans spend months tailoring their own costume. Others buy them in the shop around the corner or borrow one. The countless specialty shops leave no desires unfulfilled. Particularly popular are costumes from well-known series and films, political figures, mythical creatures and of course the 70s and 80s.The fancier and more noticeable, the better! When choosing a costume however, "Every Jeck should choose a costume that does not scare other people" (Hans-Peter Such and from the Düsseldorfer Carneval committee),because it is a festival, dedicated on spreading fun and joy , not fear.

Although the actual process of festivities is the same, all cities have their own traditions and customs: 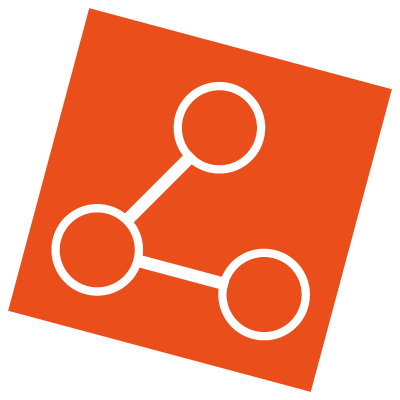